Apr-22: Have you got “confirmation bias”

You are here:
Betting Blog 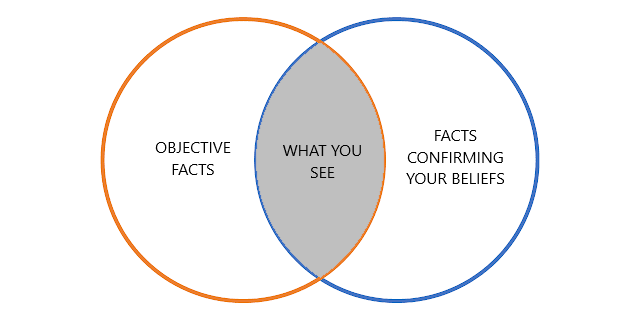 Have you got “confirmation bias”

The perils of fitting the evidence to suit your argument

As shown in previous articles – if you click here and here – I do like a discussion about cognitive bias.

In other words, the sub-conscious mind-games that our brain can play on us, and how these can trigger certain reactions.

Reactions that had we taken a bit more time to think and act, dispassionately and free from any preconceptions, we might not have had.

So having previously spoken about recency bias and primacy effect…

I want to return to the subject with a look at confirmation bias.

Because what I see many times with members is a tendency to view betting results in a certain light (positive or negative… but mostly negative!) when the actual figures should not, logically, lead to such a conclusion.

This is known as confirmation bias.

And to illustrate this phenomenon in practice, I’ve reproduced this article from the website verywellmind.com.

It talks about the topic in a much articulate way than I could ever do!

Where do your beliefs and opinions come from?

If you’re like most people, you feel that your convictions are rational, logical, and impartial, based on the result of years of experience and objective analysis of the information you have available.

In reality, all of us are susceptible to a tricky problem known as a confirmation bias.

A confirmation bias is a type of cognitive bias that involves favouring information that confirms your previously existing beliefs or biases.

For example, imagine that a person holds a belief that left-handed people are more creative than right-handed people. Whenever this person encounters a person that is both left-handed and creative, they place greater importance on this “evidence” that supports what they already believe. This individual might even seek proof that further backs up this belief, while discounting examples that don’t support the idea.

Confirmation biases impact how we gather information, but they also influence how we interpret and recall information.

Let’s say, John is in support of leaving the EU. He seeks out news stories and opinion pieces that reaffirm the move away from Europe. When he hears stories about Brexit in the media, he interprets them in a way that supports his existing beliefs.

Jane, on the other hand, is a remainer. She seeks out news sources that are aligned with her position. When she comes across news stories about staying in the Economic Union, she interprets them in a way that supports her current point of view.

These two people have very different opinions on the same subject, but their interpretations are based on their beliefs.

Even if they read the same story, their bias tends to shape the way they perceive the details, further confirming their beliefs.

He demonstrated that people have a tendency to seek information that confirms their existing beliefs. Unfortunately, this type of bias can prevent us from looking at situations objectively. It can also influence the decisions we make and lead to poor or faulty choices.

During an election campaign, for example, people tend to seek positive information that paints their favoured candidates in a good light. They will also look for information that casts the opposing candidate in a negative light.

By not seeking out objective facts, interpreting information in a way that only supports their existing beliefs, and only remembering details that uphold these beliefs, they often miss important information. These details and facts might have otherwise influenced their decision on which candidate to support.

In his book Research in Psychology: Methods and Design, James Goodwin gives an example of confirmation bias as it applies to extra-sensory perception.

“They also fail to recognise that if they talk to their mother about every two weeks, their frequency of ‘thinking about mother’ will increase near the end of the two-week-interval, thereby increasing the frequency of a ‘hit.’”

As Catherine Sanderson points out in her book Social Psychology, confirmation bias also helps form and re-confirm stereotypes we have about people.

“If you learn that a new female friend hates cooking and loves wrestling, and that an old male friend hates football and ballroom dancing, you are less likely to remember this new stereotype-inconsistent information.”

Unfortunately, we all have confirmation bias. Even if you believe you are very open-minded and only observe the facts before coming to conclusions, it’s very likely that some bias will shape your opinion in the end. It’s very difficult to combat this natural tendency.

That said, if we know about confirmation bias, and accept the fact that it does exist, we can make an effort to recognise it by working to be curious about opposing views and really listening to what others have to say and why. This can help us better see issues and beliefs from another perspective, though we still need to be very conscious of wading past our confirmation bias.

You can read this excellent article in its entirety if you click here.

But I hope that after reading it you can see how, potentially, you could fall foul of this subtle mind-trick and end up doing something which, on the face of the evidence, when viewed impartially, you maybe shouldn’t have.

OPINION: The thing about confirmation bias is that it can govern our actions more than we think. Time and again I see members throw in the towel when a few results go against them, even though the overall picture is one of profit. They almost ignore the winners, fixate on the losers, and end up, if they’re not careful, dropping out of a winning service like the Irish Cash Consortium or Golf Insider. So whatever you do, make sure your decision-making is clear, logical and based purely on the facts. All of them!!

Go to Top
Manage Cookie Consent
To provide the best experiences, we use technologies like cookies to store and/or access device information. Consenting to these technologies will allow us to process data such as browsing behavior or unique IDs on this site. Not consenting or withdrawing consent, may adversely affect certain features and functions.
Manage options Manage services Manage vendors Read more about these purposes
View preferences
{title} {title} {title}